“People have come from up and down the East Coast,” said Ian Stewart, the group’s president.

Stewart, a timber framer and owner of New Netherland Timberframing & Preservation, said the skilled craftspeople who led demonstrations came from across the country and overseas.

Stone carver Charles Jones, training manager for Historic Environment Scotland, shipped stone from Scotland to Clermont prior to the workshop so he could teach stone carving and leave a bench as a gift for Clermont. 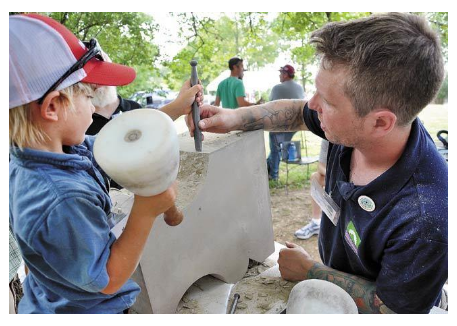 The 360-acre farm, at 801 E. Main St. in Berryville, is funded and managed by the Clermont Foundation as a research and training site. The property is owned by the Virginia Department of Historic Resources.

The International Preservation Trades Workshop takes place in a different location each year.

According to Stewart, there are a few reasons why preserving old trades is essential.

“Old buildings should be repaired with the right materials and skills,” he said. “Modern materials aren’t always the best replacements.”

He said it is important to reach young people “who want to learn these trades, so they are never forgotten.”

“One hundred years ago, when you were building a house, you had a pool of craftspeople in your neighborhood,” Stewart said. “Now, when you want work done correctly on an old building, you have to search, sometimes in other states.”

As of 2012, there were 7 million housing units in the United States built prior to 1912, so it’s important to have people trained in old techniques in order to repair as well as build, he said. 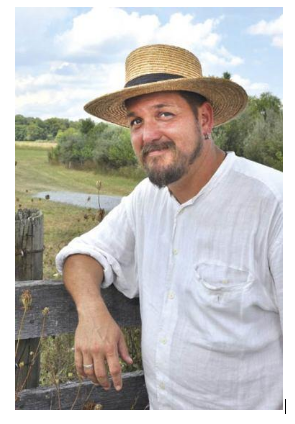 “We’re pushing education. There are 25 people here this weekend on scholarship.”

He said there is “an inherent dollar value in historic techniques. Historic preservation is one of the greenest forms of building. Old buildings long ago paid their carbon debt.”

During the workshop, mason Andy DeGruchy, of LimeWorks.us in Telford, Pa., led a team of his employees and workshop participants as they removed the hard Portland cement mortar that was inappropriately used when repairs were previously made to Clermont’s springhouse. First, DeGruchy demonstrated removal techniques and then how to repoint the fieldstone walls using lime mortar.

The featured demonstrator at this year’s workshop was David Hayles, who is known the world over for his skill in the ancient art of scagliola. Scagliola is imitation marble or other stone, made of plaster that is mixed with glue and dyes, and then painted or polished.

“Many times when you see what looks like marble in an old home or building, it’s actually plaster made to look like marble,” Stewart said.

Stewart said he has seeing people coming back to these types of trades.

“They’re tired of sitting in front of computers, and they are finding the joy of working with their hands.”